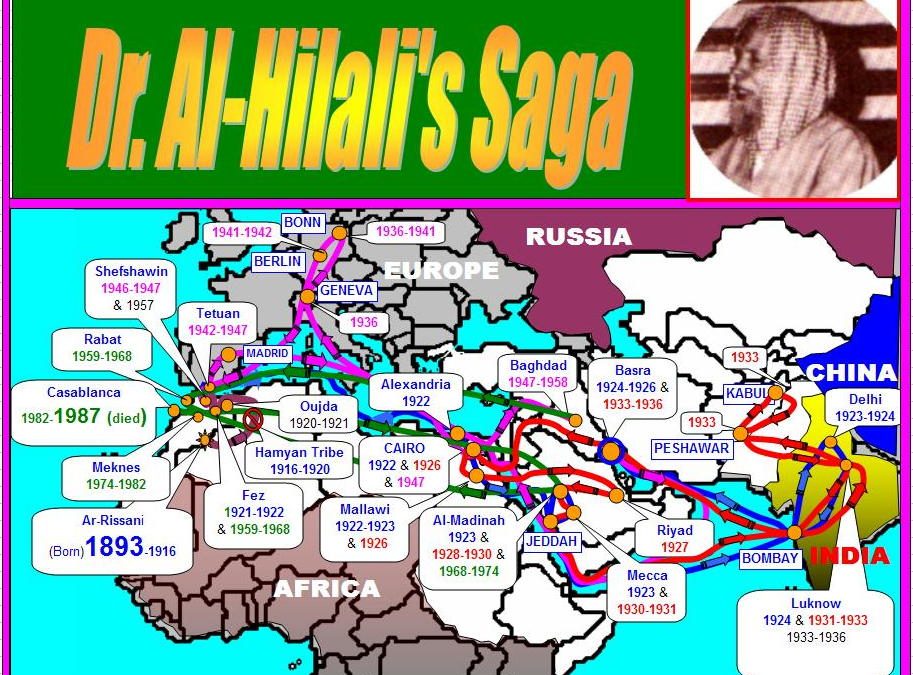 He writes concerning his grandfather2: Our grand father was a righteous man of repute, and his tomb was visited by people. He is counted among the saints in the region of “Al-Ghorfa” in the South-Eastern part of Morocco.وجدنا كان مشهورًا بالصلاح وله قبر يزار وهو معدود من جملة الأولياء في ناحية الغرفة من القسم الشرقي الجنوبي في بلاد المغرب‏.‏ 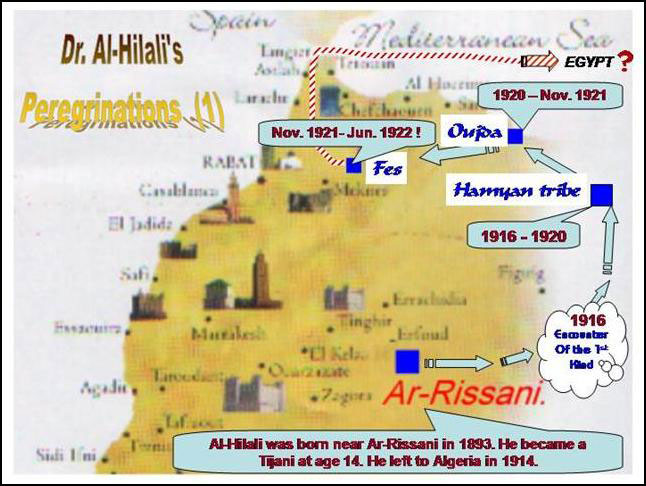 One must understand that Dr. Al-Hilali is using the term “Wali” (Saint) here, as conveyed by the popular lore and wisdom in Morocco, and not as he would come himself to understand the real meaning of this term later, once he became a Salafi.
See; “question 3” in his book “Al-Hdyyah Al-hadyyah Ila At-Tã’ifah at-Tijãnyyah”, pp. 39-41, where he went to a great length, in explaining the nuances and differences between the Quranic “wilãyah” and the satanic one.
This remark is supported by two facts;
Fist; Al-Hilali was a follower of Aţ-Ţariqa At-Tijaniah before being convinced to quit his garb to become a salafi, i.e. he was an associator (mushriq) (مشرك), as he would admit himself on many occasions, and so were also his father and grandfatherو and all their Moroccan contemporaries at this juncture of time.
Second; all the pseudo-saints of Morocco, and up to these days, whose tombs were, and are still visited by the ignorant laypeople, either for intercession on their behalf with Allah, imploration, forgiveness of their sins,…etc,…were and remain outright associators, who did not/don’t bother much to be either faqihs or ‘alims.
So we don’t know, what Dr. Al-Hilali meant by the qualifying term; (‘Alim), since he did not cite any outstanding publication, that would qualify his fathers to bear such title.
Dr. Al-hilali mentioned in his book “Al-hadyyah…” pp. 9-10, and in other publications of his, that he has an encounter of the first kind with the “Parallel world”
He said that he was satisfied at first, by the explanation given to him by his Hamyani Sheikh and mentor; Muhammad habib Allah As-Shanqiti; who told him, basing his conclusion on Al-hilali’s account of the event; that the person who came out of the cloud was a satanic manifestation.
Al-Hilali said; that after studying Hadith, and learning about the Prophet’s experience, when he was visited by the Archangel Gabriel, the answer of the Sheikh satisfies him no more!

Why Dr. Al-Hilali got himself confused, instead of being secure in the explanation given to him by his Sheikh?

In Dr. Al-Hilali’s recollection of that event, a blatant antinomy is evident, between his saying that he prayed fervently to God, to let the cloudy stranger to talk to him first, if he was well intentioned and of good will, and the fact that the latter did not comply with such wish!
Understandably enough, this unconventional musing comes as no surprise from anyone who makes such an encounter, since it is not rare, that such people become marked with its memory for life.

1) Dr. Hilali arrived at Fez in spring 1340 a.h/1921-1922. He met there with As-Sheikh Al-Faţmi As-Sharradi (death: ?)(الفاطمي الشّرّادي), and the younger Salafi zealot; Muhammad Ibn Al-‘Arbi Al-‘Alawi (1879-1964) (photo) (محمد بن العربي العلوي), with whom he had that memorial dialogue, that convinced Hilali of the falseness of the At-Tariqa At-Tijania;s assertions and claims and wined him to the salafya’s side. 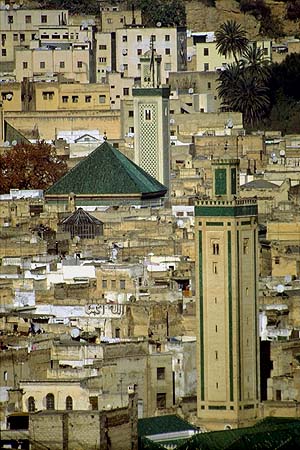 But apart from these encounters with these two scholars and with Abd Al-Ħay al Kattani, the Sheikh of the Kattaniah’s Tariqa, he did not attend any particular or regular courses with others scholars in Al-Qarawyin University (photo). His sojourn in Fez was too short for such an undertaking, as he left Fez by the end of that same year to Cairo.
His biography asserts that he received an Ijaza (إجازة) from the Al-Qarawyin. This Ijaza would be considered latter as equivalent and homologous to the German “Abitur” to permit him access to the University of Bonn3.
This bestowing of an Ijaza on Al-Hilali, does need too much of an explanation or rationalization, given that he had already completed, all the Al-Qarawyin’s requirements for the fiqh (Jurisprudence) and Arabic curriculums, through the personal tutoring he had with his Sheikh As-shanqiţi. The more so, since this ‘Alim’s status of Al-Hilali was also attested by four historical facts:
First: When Al-Hilali was invited to As-Sheikh Al-Fãţmi’s home, he treaded him not as student, but as an equal fellow scholar4,
Second: Allal Al-Fãsi (photo), who would be predestined to play a central role in Moroccan religious thinking and politics, before and after the independence (see cover of the book we dedicated to his biography), was 14 years old when he started at this early age to attend courses in Al-Qarawyin in 1338 a.h/1919. He took courses in fiqh with the Sheikh Muhammad Ibn Al-‘Arbi Al-‘Alawi, the man who took Al-Hilali out of his At-Tijaniah’s garb.
But while Allal Al-Fasi’s biography says that he attended also courses in Al-Ħadith (tradition of the Prophete P.B.H) with the renown salafi; Abu-Shû’ayb Ibn ‘Abd Ar-Rahman As-Siddiqi Ad-Dukkali (1295 a.h/1878-1357 a.h/1938) (photo)5, the man who was instrumental in introducing the salafya teaching to Morocco, and who convinced Muhammad Ibn Al-‘Arbi Al-‘Alawi to adhere to the salafyia in the first place, it should be understood that Allal Al-Fasi attended Ad-Dukkali’s courses only after the episode of Dr. Al-Hilali’s sojourn in Fez, since the later did not meet with Ad-Dukkali who was then Minister of Justice and Knowledge.
Third: whenever Allal Al-Fasi and Dr. Al-Hilali had occasions to meet, Allal had always treated Al-Hilali with the kind of deference and respect due to a Sheikh and not to a pal.
Fourth: The Roster of the “Al-Qarawyin’s ‘Ulama” of Ibn Al-haj: Muhammad Ben Al-Faţmi As-Sulami (محمد بن الفطمي السلمي: ابن الحاج) (see photo of him lecturing in Al-Qarawyin) entitled; “إسعاف الإخوان الراغبين بتراجم علماء المغرب المعاصرين” does corroborate this fact, by not listing Dr. Hilali in it, while it lists older and younger contemporary ‘Alims of Hilali!
Thus, it becomes clear why Dr. Hilali, should not be considered as a student of Al-Qarawyin, as all his biographers try inaccurately to convey!

I don’t know for sure which itinerary al-Hilali chose to go to Egypt. The itinerary traced on the accompanying map is tentative.

Please send us your feedback and pictures of persons and places that document the relevant events, and feel free to translate this page into your own native tongue and return it to us, in order to facilitate to your fellow countrymen access to this forum.

His ancestry go back to the gender of the Prohet;’Ali Ibn Abi Taleb (32 b.h – 40 a.h)
“Al Hidãya Al-hãdiyyah”, p. 7
See: Hilali’s Tafsir; “Sabil Ar-Rashad”, pp.11-13. where Omar Ben Muhammad Mohsin, the Moqri'(Reciteur) (المقرئ) and Imam of King Abd-al-Aziz Mosque in Anfa (Casablanca), one of Hilali’s disciples is repeating this.
Dr. Al-hilali says in his book : ” Al-Hidaya Al-Hãdiah”, p. 21, That The Sheikh Al-Faţmi sent for him his mule and his slave to bring him to his home.
He enrolled in Al-Azhar in 1314 a.h/1896.and after finishing his studies he moved to Mecca and was appointed by it’s Amir the Sharif; ‘Awn Ar-Rafiq as Khaţib in the Haram’s Mosque and Mufti in the four Sunni Madhhabs. He returned to Morocco in 1325 a.h/1907 in company of the Moroccan King Abd-Al-Hafid and thought in Al-Qarawyin for nearly three years, before being appointed Cadi in Marrakesh in 1328 a.h/1910. And with the advent of the French colonial Protectorate which was forced on Morocco by the French and colonial Europe in 1330 a.h/1912, he was appointed Minister of Justice and knowledge. Function, he would occupy up to 1342 a.h/1923 before resigning on account of his bad health. The Colonial authority bestowed on him the honorific colonial title of Commander!. He died 1n 1356 a.h/1937. 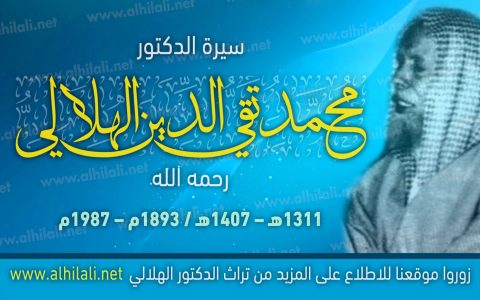